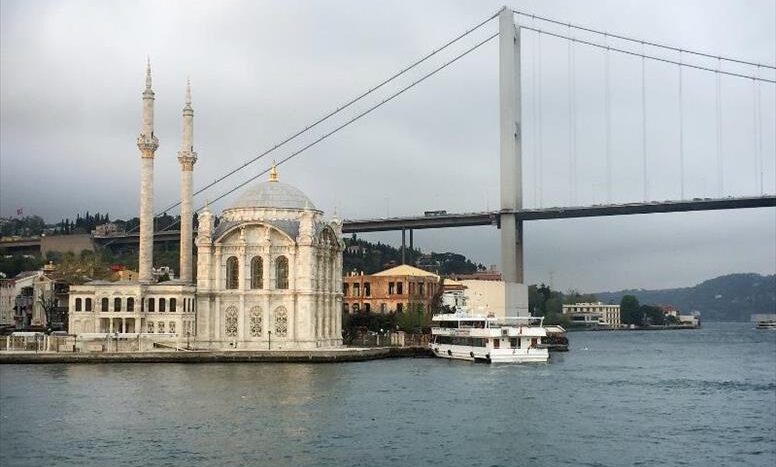 The Turkish novelist and writer wrote in his book “Istanbul, the city of memories:” The Bosphorus, the soul of Istanbul, and from it derives strength.

The Bosphorus is one of the most important landmarks of Istanbul and has vital and tourist importance, and gives importance to the neighboring real estate, and we have been keen in this article to take note of everything you need to know about the Bosphorus Istanbul

The Bosphorus Strait in Istanbul connects the Black Sea and the Sea of ​​Marmara, and the strait that separates Asia and Europe is considered this and what gained him a unique strategic importance, as it is an ancient passage for commercial and tourist ships, oil tankers and cargo ships that cross the Strait continuously.

The strait separates the city of Istanbul into two parts: the European Istanbul and the Asian Istanbul, and the length of the strait is 30 kilometers, and the width varies from one region to another and ranges between 0.7 to 6 kilometers.

luxurious palace for sale in Istanbul

Considering that the Bosphorus in Istanbul is a maritime divide between both Asian and European Istanbul, there must have been bridges between the two sides of the Bosphorus and facilitate the movement of cars between the two regions, and these bridges number three and they seem like pearls that decorate the strait and add to its beauty another beauty.

The date of construction of this bridge dates back to 1973 and was called the Bosphorus Bridge, but after the failure of the July 15 coup in 2016 and because of the symbolic bearing of the bridge because the Turkish people opened the bridge against the will of the coup forces, the bridge was named after the martyrs of that night “July 15 martyrs” in honor of for them.

The July 15 Martyrs Bridge connects the two regions of Otakoy on the European side of Istanbul with the Belarusian side on the Asian side, and approximately 180,000 vehicles pass through the bridge every day.

This bridge was built in 1988 and was named by this name in honor of the Ottoman Sultan Mehmed the Conqueror who conquered Constantinople “Istanbul”, and it is also called the second Bosphorus Bridge.

This bridge connects each of the regions Kvajik on the European side of Istanbul and the blockade of Usto on the Asian side, and is currently ranked in the fourteenth globally among the bridges suspended in terms of the mass of steel used in its construction.

Its construction was completed in 2016 and is considered the longest suspension bridge in the world that contains tracks inside it dedicated to railways, and is characterized by its huge design, as it is known to be one of the longest and widest bridges in the world, and it took Turkey four years to complete its construction.

As for the transit fees on the Bosphorus Istanbul bridges, it ranges between 10 and 29 Turkish liras depending on the type of vehicle, and these bridges are among the highways.

An underground tunnel through which a metro line runs, called “Marmaray”.

The length of the tunnel is 1400 meters

The cost of entry to the Marmaray Metro does not exceed the regular cost of regular metro transportation in Istanbul.

The line was expanded in 2019 to include many new stations and to be the longest metro line in Istanbul.

A tunnel that passes from the bottom of the Bosphorus Strait and consists of two floors measuring 5.4 kilometers in length and greatly contributed to tackling the increasing traffic problems in Istanbul, and reduces the time required to travel the distance between the areas of Goz Tabah and Kassel, from 100 minutes to only a quarter of an hour.

Transit fees for cars from the tunnel vary depending on the type of car, small cars at 23 TL and large cars at 34 TL.

-The most important attractions of the Bosphorus Istanbul

Historical palaces of the Ottoman sultans

The Bosphorus palaces on both sides of the strait in Istanbul, Asia and Europe, maintain their beauty in terms of design and historical significance, since most of them date back to the era of the Ottoman Sultans and they have known memories and stories.

The number of historical palaces on both sides of the Bosphorus is about 600 historical palaces, of which 150 are still preserving the shape in which they were built for the first time, while the rest of the palaces have been subjected to numerous incidents, including natural ones, including humanity, and suffered several fires.

The Turkish government pays attention to these palaces due to its tourism and vital importance and its distinguished location on both sides of the Bosphorus Istanbul, and has offered a number of them for sale recently with some conditions that the government places on the buyer so that the buyer does not have the right to make adjustments to change the features of the palace, and only restoration that preserves the palaces and does not change their features.

Besides the palaces that were intended for the residence of the Ottoman Sultans, you can notice the presence of many historical castles and forts designed to protect and defend the city.

Some of these castles date back to the Ottoman period, while others date back to previous historical eras before the Islamic conquest of Istanbul.

Istanbul was known since ancient times with the strength of its military fortification.

These castles draw thousands of visitors daily to see the greatness of its construction and take memorial photos inside it, the most famous of which is Rumeli Hisar Castle, which has attractive views of the Bosphorus Strait, which was built by the Ottoman Sultan Mehmed the Conqueror and took four months to build.

In the heart of the Bosphorus, there are many towers and lighthouses that were previously used to guide ships coming from the Black Sea or the Sea of ​​Marmara.

Including the girl tower, which is located in one of the Bosphorus islands, 200 meters from the coast of Escudar on the Asian side of Istanbul, and this tower is one of the distinctive tourist destinations.

It is located on the European side of Istanbul, and it is also called “Gulf”, which is a peninsula in which the Bosphorus strait flows, and contributes to the European section of Istanbul into two sections, old and modern, and is the oldest natural port in the world, and the length of the port is about 7.5 km.

The location of neighborhoods close to the Bosphorus and adjacent to it has made them vital areas par excellence and a favorite for real estate investors, as it is known that the site is the most important element that guarantees the success of your real estate investments.

-What are the forms of real estate investments near the Bosphorus?

1-Buying villas near the Bosphorus, and this type is most prevalent in the region due to the sophistication, luxury and safety that the area enjoys, along with charming views.

2-Purchase of offices and real estate of a commercial nature suitable for company incorporation.
3-Investing in tourist restaurants and cafes.
4-Buying palaces and this type of investment appeals to the wealthy and many princes, especially from the Arab Gulf region.
5-Purchase of hotels or hotel apartments within projects prepared for this purpose.

-What are the advantages of real estate investment near the Bosphorus?

1-The privileged location, which is lively and full of tourist boom.
2-The abundance of the transportation network of all kinds.
3-The presence of the finest commercial complexes and the latest international and Turkish brands.
4-Luxury within and around residential complexes.
5-Charming views of the Bosphorus.
6-Increased government interest in the region.
7-High prices for rents.
8-Real estate growth rates are relatively high.
9-Converting real estate pricing from dollars to Turkish lira helped provide hundreds of real estate opportunities at very encouraging prices.
10-Near the Bosphorus, most of the vital facilities and services of interest to foreigners, such as banks, malls, foreign consulates, parks, etc.

The Bosphorus Istanbul is one of the important and vital areas on the level of Turkey and the world.