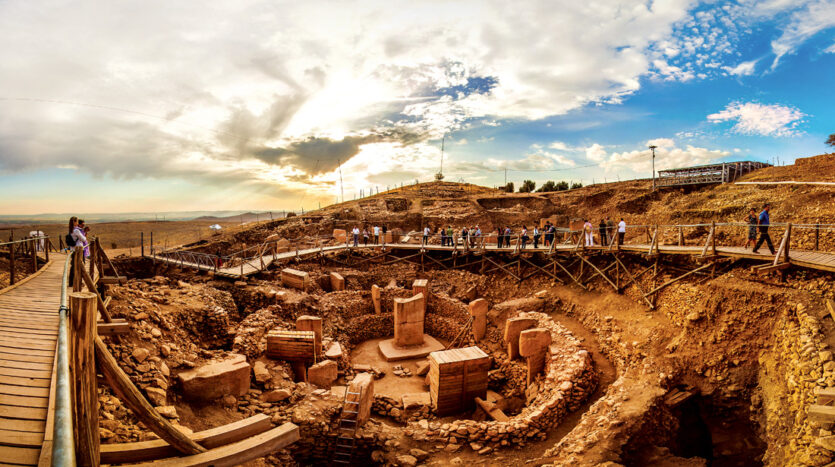 To learn more about this archaeological area that captures the eyes and hearts, which includes the oldest group of rock buildings in the northern Mesopotamia region, showing a history that extends back to 12 thousand years ago, and we in turn advise you to read this article.

The beginning of the discovery of “Gobekli Tepe” was by a Turkish farmer who found an archaeological structure when he plowed his land, to hand it over to the relevant authorities in the state, and with the last verification of the structure, it was found that it dates back to 12 thousand years ago.

Subsequently, specifically in 1963, the Culture and Tourism Directorate in shanlıurfa commissioned researchers from the Turkish universities of Istanbul and Chicago, USA, to excavate antiquities in the region.

In 1995, many monuments were discovered in the region, including “T” stone obelisks dating back to the Neolithic period, with a length of between 3 to 6 meters, and a weight of between 40 and 60 tons, and with drawings, animal figures and human statues.

Luxury villas within a residential project

Meanwhile, the ruins of “Gobekli Tepe” temple were discovered, which is one of the oldest places of worship in the world, meaning that it is older than the pyramids of Egypt and the ruins of “Stonehenge” located in southwestern Britain, by about 7 thousand and 500 years.

In July 2018, the 42nd meeting of the World Heritage Committee, held in the Bahraini capital, Manama, approved the annexation of the Gobekli Tepe heritage area to the World Heritage List of the United Nations Educational, Scientific and Cultural Organization (UNESCO).

Since 2011, the area has been included in the temporary list of the World Heritage of the United Nations.

After that, the “Gobekli Tepe” area, which was described as “the zero point for humanity’s departure”, began to receive great interest and demand from tourists.

Luxury apartments for sale in a residential project

The demand for the aforementioned archaeological area has increased dramatically after Turkish President Recep Tayyip Erdogan announced that 2019 will be the “year of Gobekli Tepe”, with the aim of introducing tourists to the archaeological site and attracting them to visit the region.

Jalal Uludag, head of the excavation team in “Gobekli Tepe”, said that the area has been available for visits for years, but it broke the record in 2019 in the number of visitors.

He explained that they are continuing their excavation and excavation work, with great sensitivity given the importance of the area and the important effects it contains.

He pointed out that President Erdogan’s declaration of 2019, “The Year of Gobekli Tepe”, reflected positively not only on the state of anlıurfa, but also on the surrounding regions and states as well.

For her part, Toby Arkan, the next tourist who came with her family from Istanbul to visit “Gobekli Tepe”, said that her curiosity to know more about the history prompted her to visit the region, expressing her deep influence over the archaeological landmarks she saw there.

As for the Ukrainian tourist, Dmitry Doods, he expressed his great admiration for the “Gobekli Tepe” area and many other tourist places in the state, inviting his friends to visit them.

Gobekli Tepe, in the Turkish state of anlıurfa, is more than just an archaeological area full of human stories through the ages. Historians classify it as “the starting point of history” itself, which makes it a tourist mark in the country and abroad.

Lake Mille Obero dazzles its visitors with its pink water

In that region located in southern Turkey, history stands tall across geography, creating archaeological paintings that summarize a time journey through the ages, review the details of human existence, and document the human presence in its various levels and stages.

Many attractions have nominated the region to become the most prominent cultural tourism destination in Turkey, so much so that it recently topped the list of areas that cannot be abandoned by tourism companies.

In July 2018, the 42nd meeting of the World Heritage Committee, held in the Bahraini capital, Manama, approved the annexation of the Gobekli Tepe heritage area to the World Heritage List of the United Nations Educational, Scientific and Cultural Organization (UNESCO).

Since 2011, the area has been included in the temporary list of the World Heritage of the United Nations.

Ali Beyler, a member of the Administrative Council of the Federation of Tourism Companies in Turkey, said that the aforementioned archaeological area is classified as “the starting point of history.”

In an interview with Anatolia, Peler referred to the announcement by Turkish President Recep Tayyip Erdogan, 2019, “the year of Gobekli Tepe,” noting that the region is one of the most important cultural monuments in the country.

He expected that there would be a good tourism movement in the southern and southeastern states of Turkey, due to the attractiveness of “Gobekli Tepe”, in addition to the support provided by the country’s Ministry of Culture and Tourism, the Federation of Turkish Tourism Companies “Torsap” and other tourism institutions.

Belair also saw it necessary for the states of the region to make the necessary preparations and preparations to receive the largest possible number of tourists, and to provide them with the best services.

Reviewing some of the efforts made within the framework of introducing tourism in “Gobekli Tepe”, he said that the head of “Torsap” hosted in “Gobekli Tepe” ambassadors of different countries such as China and India, stressing that they intend to intensify activities of this kind during the year.

In the same regard, he pointed out that more than 10 thousand member companies of “Torsap” will, in 2019, allocate a special place for the “Gobekli Tepe” area within their tourist destinations, and will be frequently mentioned in their various activities.

He explained: “Torsap will also draw attention as much as possible to Gobekli Tepe, and will place the region among its priorities within the areas to be visited. Therefore, we are planning to increase trips to the state of anlıurfa, and from there to the mentioned archaeological area.”

In order to raise the level of services provided to Gobekli Tepe visitors, Belair indicated that they are cooperating with local administrations in anlıurfa.

He continued: “Our companies active in the field of cultural tourism have put Gobekli Tepe on the list of the main tourist areas, and these companies will work throughout the year to highlight Gobekli Tepe more in their programs, events and conferences.”

“Torsap” is not excluded as well, which is also making the same efforts, according to Belair, who concluded by stressing that this archaeological area is no longer a cultural and tourism landmark in Turkey only, but on the world level. ”

For his part, Muslim Chopin, head of the regional tour guide room in anlıurfa, said that “Gobekli Tepe” has an attractive force for local and foreign tourists.

He indicated that the archaeological area should be seen and inspected in its place by visiting it.

In an interview with Anatolia, Fei expressed their happiness at the transformation of “Gobekli Tepe” to one of the main areas for archaeological and cultural trips.

The archaeological area of ​​”Gobekli Tepe” is the oldest group of rock buildings in the northern Mesopotamian region, and its history extends back to 12,000 years ago.

The area was discovered in 1963 by researchers from the University of Istanbul and Chicago, USA, and excavation and research work continued for about 54 years.

In 1995, many antiquities were discovered in the region, including “T” stone obelisks dating back to the Neolithic era, with a length of between 3 and 6 meters, and a weight of between 40 and 60 tons, with drawings and animal figures, and human statues.

At the same time I discovered the ruins of the “Gobekli Tepe” temple, which is one of the oldest places of worship in the world, as it is older than the pyramids of Egypt and the ruins of “Stonehenge” located in southwestern Britain, by about 7 thousand and 500 years. 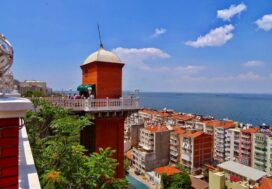