Tortum waterfalls, the largest in Turkey and the third largest in the world 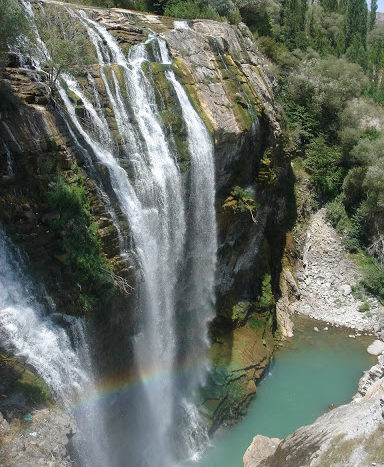 To get to know the Tortum waterfalls that come to many local and foreign tourists , we recommend reading the article.

The northeastern state of Erzurum embraces the Tortum waterfalls, which are classified as the largest and highest in the country, and the third highest waterfalls around the world, making them a favorite destination for thousands of domestic and foreign tourists visiting the Turkish state.

The Tortum waterfalls are the largest and highest of its kind in the country, making it a favorite destination for thousands of local and foreign tourists visiting the state.

The Tortum waterfalls were formed in the eighteenth century after the collapse of a mountainous area near the village of “Balqali”, which is affiliated to the district of Ozone Dora in the state.

The waterfalls, which are 87 km from the center of Erzurum, have a height of 48 meters, a width of 21 meters, and are classified among the most beautiful waterfalls in the world, because of their unique beauty that fascinates nature lovers.

In order to increase the tourism movement in the region, the public and private sectors have embarked on implementing many tourism and service projects and investments there.

The waterfalls to enter the World Heritage List of the United Nations Educational, Scientific and Cultural Organization “UNESCO”, is also the third highest waterfall around the world.

The project includes the construction of walking and bicycle paths around waterfalls, cafes and restaurants, a monument, wooden houses, tourist offices, fruit gardens and parks.

The Anatolia News Agency quoted the governor of Erzurum, Ogay Mamish, as saying that the mentioned projects will contribute to increasing the number of visitors to the “Tortum” waterfalls, and enable visitors to easily roam the area.

He explained that the project will provide employment opportunities for 200 people, noting that the interface of the Shallalat area will change significantly for the better, after the completion of the completion of development projects in it.

He added that the number of visitors doubles at the end of the week, noting that many of them came from outside the state, and even from outside Turkey as well.

Turkish ” Cotton Castle ” set a record number of visitors
International report: 3 Turkish cities are among the fastest growing globally in the number of visitors and arrivals
Sign into your account
Create an account
Reset Password
Register here! Forgot Password? Back to Login Return to Login