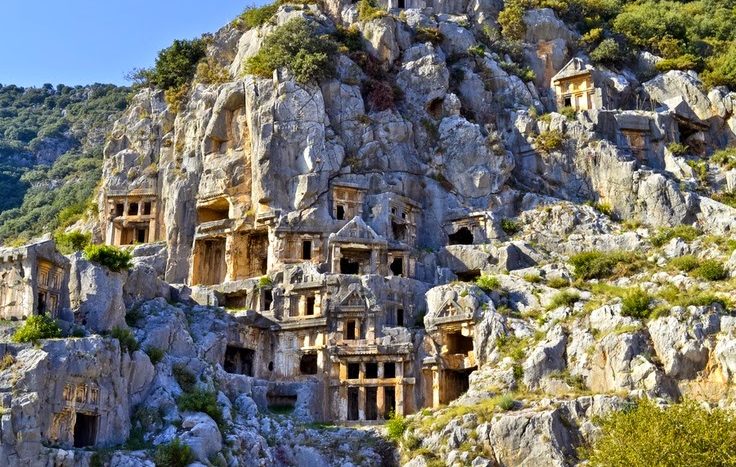 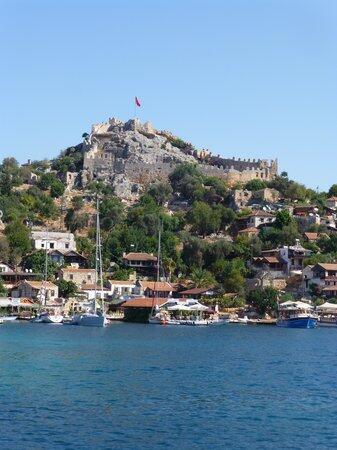 To get to know DEMRE, we encourage you to read the article.

Demre in other words Castle or Myra with its ancient name. It is a small district of Antalya with a population of 25,000. In fact, many believe, especially a little bit of history is heard by anyone interested in a place. Let us get to know this beautiful city with such a rich history and nature. I will tell you about its history and then its historical sites and natural beauties.

One of the most important cities of Lycia, the history of Demre BC. It dates back to the 3rd century. During the Roman rule, Myra developed and prospered. Myra means the location of the supreme moment goddess. The city, which was first established on the hill where the rock tombs are today, expanded later and became one of the most important cities of Lycia. Demre was an administrative and religious center during the Byzantine period. Nicholaus served in the 4th century in Myra, the episcopal center. Since then, Demre has been a cross-visited city for Christians.

Demre, which attracts the attention of the Christian world, holds traditional events every year on December 6th. The remains of the largest theater in Lycia are still intact and the best preserved so far. Leaning on the hill, the theater has 29 seats and a capacity of approximately 10,000 people. It is still used for some festivals and games.

Myra M.S. After the 2nd century, especially after the interest of rich people, many new buildings were built. Rock tombs and rock carved churches and tombs were built.

A.D. Arab raids that started in the 7th century and the frequent overflowing of the Myros river, in addition to frequent earthquakes, reduced interest in the city and people began to leave. When the Turks came to this region, the city was abandoned. Demre became a village under the name of Eynihal in 1904, and became a district on June 6, 1968 as a gift and in 1987 as Kale. The district was named Demre in 2005.

Kekova is the place where nature and history are integrated and contains extraordinary beauties. Especially blue cruise enthusiasts who visit the bays can not pass without visiting a place. Due to their natural structure, they can easily anchor. If you do not have a yacht, the easiest way to get to the sea is by renting a boat from Kale Çayağzı. At the pier, the ancient city of Aperlai and the peninsula are located at Toprakada and Karaada. The island extends beyond Kekova. All this region is called as kekova because of this island. Kekova is submerged in some water because of earthquakes, so this region is called a sunken city.

Alperlai, Sunken City, Simena, Theimussa and Istlada on Gökkaya Bay are the ancient cities which are very close to each other. Apart from these seaside cities, there are Apollonia in Kılıçlı and Tyberissos ancient cities in Çevreli.

Tyberissos is situated on a 365 m high hill overlooking the plain. Lycian rock tombs and Lycian sarcophagi from the Hellenistic and Roman periods are located at the foot of the mountain.

The ancient city is located on two peaks of the hill. There is a church built on the temple of Apollo on the north hill and the acropolis on the south hill. Kekova island gives its name to the region. The castle is a large island lying in front of the village. At the end is the shipyard bay, where boats can anchor. There are remains of a church belonging to the Byzantine period. There are historical ruins all over the island since no work has been done before. Here you can find steeped houses and ruins in the sea. Along the coast you will see half-submerged houses and half-submerged houses and home foundations.

The ancient city of Myra BC There are evidence proving that it continues to exist from the 5th century. The ancient city of Myra, where you can feel the history of the most important ruins, was built in 1034 during the Arab invasion. The church of St. Nicholas was destroyed. The ancient city of Myra was connected by a canal through the plain bearing its name, Andriake, located at Çayağzı. Numerous historical remains can be found in this area. All of them need to be protected and excavated. However, since each side of Anatolia is full of historical buildings and ancient cities, excavation in each region will be very costly. For this reason, it is generally taken under protection and waits for the order of excavations. Myra was the capital of Lycia for a period. St. The St. Nicholas Church is the most outstanding example of the Middle Byzantine church architecture to date. The ancient and eastern trade routes of Myra, St. Nicholas is located at the crossroads of different cultures carrying different parts of the cult. The relations with the imperial capital Constantinople and other cities made Myra a cosmopolitan center for both urban life and the development of Christianity. The large scale and wealth of the St. Nicholas church also supports Myra’s role as a center of influence on the entire urban structure.

St. Nicholas, known worldwide as Santa Claus, was born in Patara, one of the important cities of the Lycian region, and lived in Myra, Demre. St. Nicholas served as a bishop in Demre. After the death of Saint Nicholas’ respected religious personality has enabled him to reach the rank of Saint2. The people of Myra built a church on his behalf after the death of the poor’s deputy, Saint Nicholas, the protector of the sailors and students. They put his dead body in the sarcophagus.

In Russia, Europe and the United States, Saint Nicholas, a highly respected figure, was posted on all boats in the Mediterranean Sea. Marines believe it protects them and brings luck.

Myra was the capital of the Lycian region. St. St. Nicholas Church is the most distinguished example of Byzantine art history. Floods, earthquakes and invasions caused great damage to St. The church of St. Nicholas was repaired in 1042 by the Emperor Constantine and in 1862 by the Russian Tsar Nicholas I.

During the Crusades in 1087, merchants from Bari stole the bones of Saint Nicholas and took them to Bari, Italy. They buried them here in the basilica. Some of the remaining bones are preserved in Antalya Museum today.

Access to the castle is not very easy. Usually there is transportation from the sea. Access is possible by land or mountain engines. The region, which is known as Kaleköy today, is due to its strategic location. 4. It has been used extensively from one hundred years to the present. The strongest proof of this is the strong fortress. You can watch Kekova and its surroundings here. It has a tremendous view. Simena is one of the rare places that only by sea transport in Turkey. The ancient fortress of Smena is a first degree protected area. It is the port city of the ancient city of Myra in Demre district. Excavations continue in the section of the Museum of Lycian Civilizations. It is possible to visit both the museum and the ancient city with a single ticket.

Andriake BC In 1973, the Seleucid Dynasty took its place in history when King Antiochus III conquered the city from the Ptolemy. It became a very important port city in antiquity. The sheep is located on both sides.

Arykanda transportation is a bit long. Finike-Elmali road to the Taurus after 27km to reach the forks. Most of the road is covered with pine and cedar trees and has a very beautiful view. A further 6km will take you to Arykanda. Arykanda is a very impressive city that has given its back to the steep cliffs. It is built on terraces rising gradually.

BC settlement in the ancient city. It is estimated to be in the 2nd century. However, BC. Remains of coins and pottery from the 5th century have been found. Roman rule in Arykanda M.S. It starts in the 2nd century. A.D. In an earthquake of 141, the city is damaged. Then the city is being repaired again. The people of Arykanda came under the influence of Christianity in the 4th century. After another earthquake in the 5th century, the majority of the population migrated to Çatallar village. They migrate to safer places to avoid the Arab attacks of the 7th and 8th centuries.

The fact that the Turks were seen as migrating tribes in the region coincides with the 11th century.

The city was discovered in 1838 by an English traveler. Excavations have been carried out since 1971. Excavations Ankara Faculty of Language, History and Geography faculty member. It is run by Cevdet Bayburtluoğlu.

Arykanda is a historical site that can be enjoyed very much because of its location as well as its largely intact structures. Even the hottest days of summer will allow you to breathe comfortably, the air will not disturb you very much and can be seen from all points, including the entire valley pananoromik attractive landscape.

The first building you will encounter at the entrance to the city is the bathhouse on the right. Standing near the walls and windows. On the opposite terrace are the remains of a large basilica. The reliefs on the right side of the city are the necropolis and a large block protected in this part.

But the real ruins are in the upper left part of the city and at the foot of the steep rising rocks. The state agora is here. The odeon behind him is completely standing. It is known that the Odeon served as a council during the reign of Emperor Hadrian. Behind the Odeon is the theater. The small but very good 20-step theater is worth a visit, with the pine tree coming out of the stairs and moving tons of weight blocks as it grows.

Behind the steep rocky hillside behind the theater is a 100-meter-long stadium with 3 rows of seats. The stadium is very solid.

Another historical site on the Finike – Kas highway is Kyaenai on the steep cliffs above Yavı Village, 23 km from Kas. You can get to the theater by car and climb from the village to the ruins. The name Kyaenai means dark blue, and is also known as the “Tinkling Rocks”. The reason for this is that the wind tingles on the rocks here.

We do not know when the city was founded, but the inscriptions uncovered the city’s history. IV. century. Since then, Kyaenai has been permanently inhabited. The wealthy lason of Kyaenaili helped 16 Lycian cities as well as his own city and worked on its reconstruction. For this reason he was given the title of “Lykiakn”, which means the greatest ruler of Lycia. The city, which developed greatly during the Roman period, continued to exist as a bishopric center during the Byzantine period and was abandoned in the X. century.

Kyaenai is built on steep cliffs up to 240 m high. A 450 m long city wall surrounds the city. It is understood from the later stones that the wall was used during the Byzantine period. There are three gates on the western and northern parts of the city wall today. There should be a fourth gate at the southern end of the western wall.

On the southern skirt of the hill, there is a theater, which has a natural inclination and has survived until today.